Strasbourg has long been in a battle for control between France and Germany because of its close access to germany's borders.

Strasbourg is the first city to be registered as a World Heritage Site.
Stroll through the old town, where French and German cultures are crossed, and take a sightseeing tour from the River Ill. that flows through the city.
You can trace the history of Strasbourg from the Middle Ages.

How many tourist days do I need in Strasbourg?

Strasbourg has a lot of places to visit in the old town, so you can get around the sights in one day.
In addition, Paris, Basel in Switzerland, and Frankfurt in Germany can be accessed in a short time.
It is also possible to take a day trip from a nearby city using the high-speed train TGV.

By the way, it takes about 2 hours and 20 minutes by TGV from The East Station in Paris, and about 1 hour and 50 minutes by ICE or TGV to Frankfurt, Germany.
You can access it.

How to buy TGV tickets from your phone: https://youtu.be/XVm3ZbOYyT4 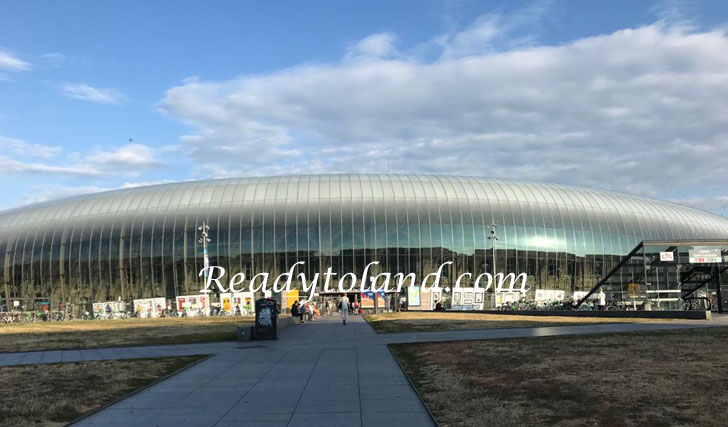 Because it is designated as a historic building in 1984, it can not be built, and modern while leaving an old-style station building
It is built to be wrapped in a glass dome. This glass dome design
Designed by Jean-Marie Dutiyor, it won the 2008 Brunel Award. 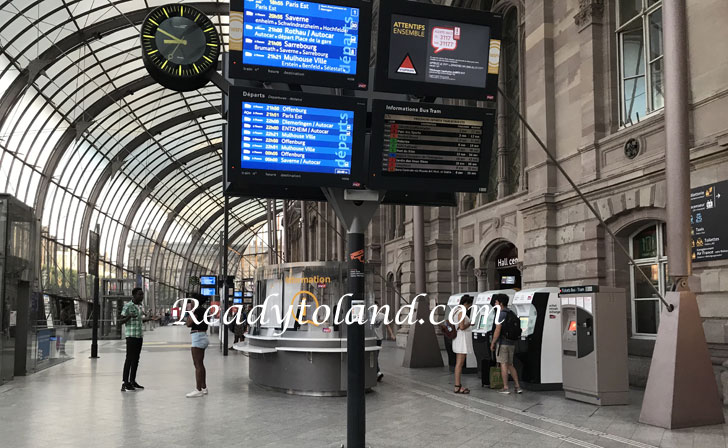 How to get around the city and tickets

The old town can be reached on foot.

If you arrive at Strasbourg Central Station, take tram A.D to The Place de la Clebert in the heart of the Old Town,
Get off at the third "Homme de Fer", after walking around the city, such as the shopping street, cathedral and Loan Palace,
I think that it is also good to tour the city of Strasbourg from the water in Batr 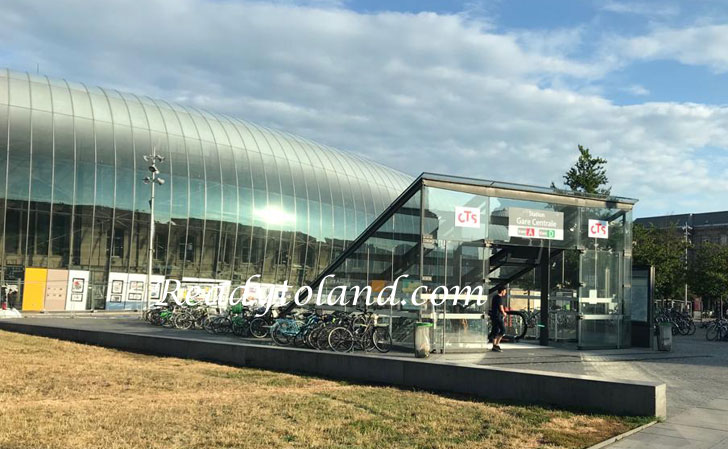 We were planning to travel by train or long-distance bus, so we stayed around the central station,
We went to the old town by tram from Strasbourg Central Station. 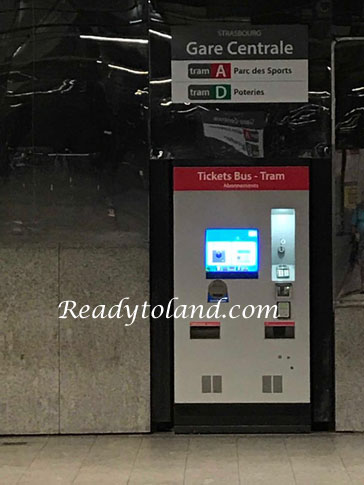 Ticket vending machines are installed at each tram station.

How much does a ticket cost?

If you act with more than one or more people, you can use the 24-hour ticket
TRIO is a good deal. Because you can get the source if you ride twice.

There is no ticket gate on the tram, so you can access the platform as it is, but it is installed on the platform before boarding.
Turn on your ticket by each other in front of the silver and red machine.

Tickets can also be purchased at the ticket vending machine attached to the tram, but it is a little expensive. 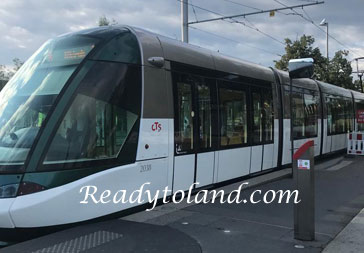 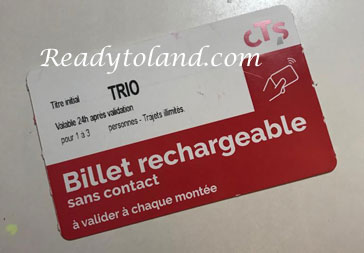 Once for 24-hour tickets, tickets are enabled in front of the machine each time.
Since the 10-time ticket is a one-person card, it is not possible to use it with multiple people. 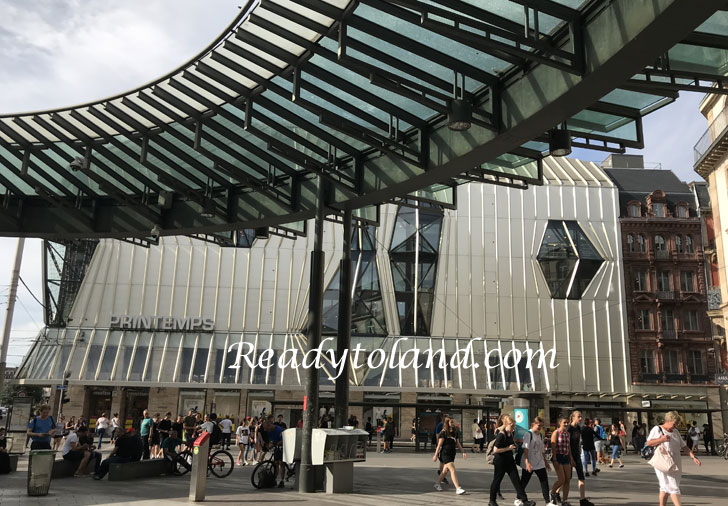 Take tram A and D, get off at the third "Homme de Fer" and go sightseeing in the city This neighborhood has become a shopping street and "PRIMPTEMPS" and "Gleries Lafayette" etc.
There are large department stores, popular brand stores, and fast fashion stores. 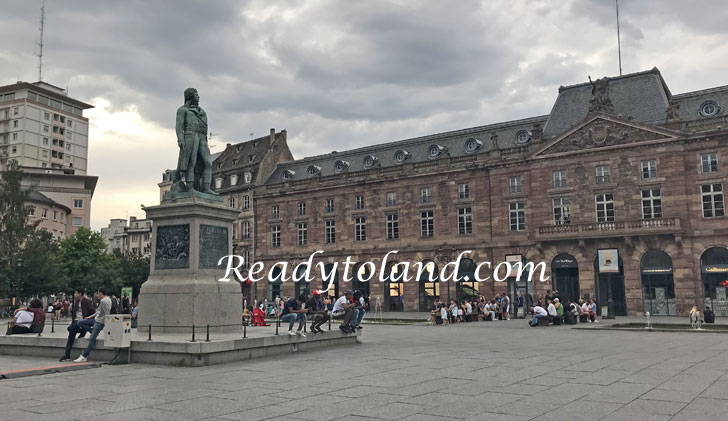 The name of Place De la Clebert in the heart of the Old Town accompanied Napoleon's expedition to Egypt
It comes from General Clevere, from Strasbourg, and in the center of the square stands his statue majestically.

From Klebert Square to Gutenberg Square, shops and cafes are lined up,
Along the way, head to the cathedral for windy shopping. 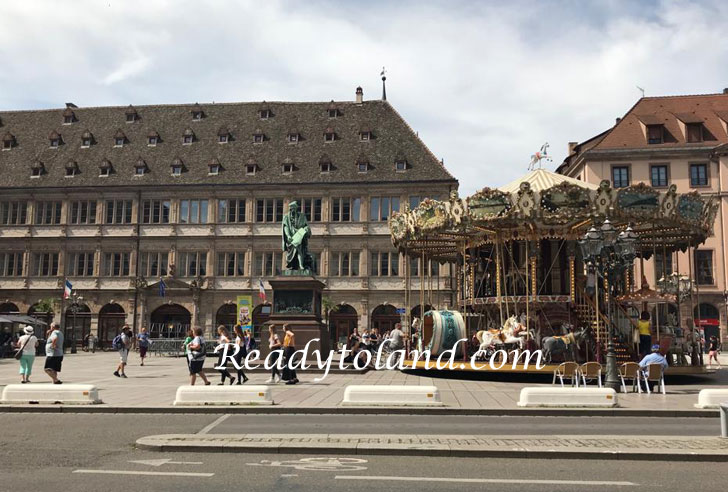 Piazza Gutenberg is located near Notre Dame Cathedral.
In the square commemorating gutenberg, the inventor who put letter print into practical use for the first time in Europe in the middle of the 15th century,
In the center is a bronze statue of Gutenberg. 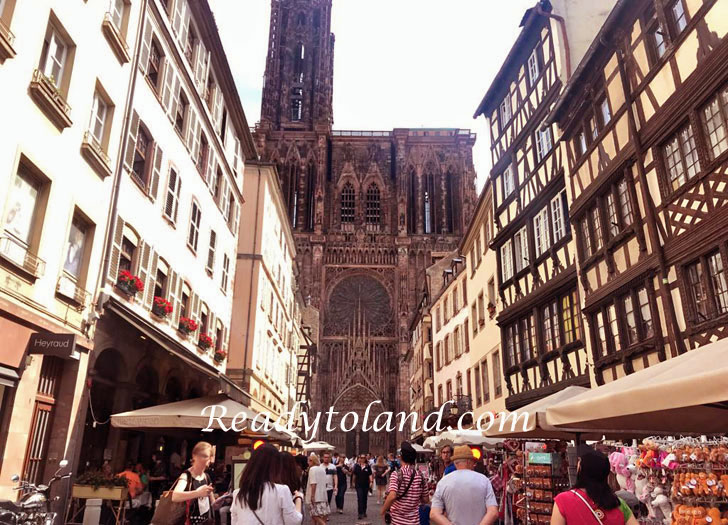 The magnificent Strasbourg Cathedral is seen from between the buildings on both sides, and it is an overwhelming presence.

The construction of Strasbourg Cathedral has been spent from 1015 to 250 years,
It is said to be a masterpiece of Gothic architecture.

The cathedral is 142m high and ranks 6th in the world in the church!
But with only one tower on the left, am I the only one who feels unbalanced?

If you look closely at the façade, it is a very delicate structure with watermarks.
It uses the sandstone of Mount Vosges, so it has a slightly unusual reddish-brown color.

It's very difficult to take pictures because there are a lot of souvenir shops in front of the big cathedral. 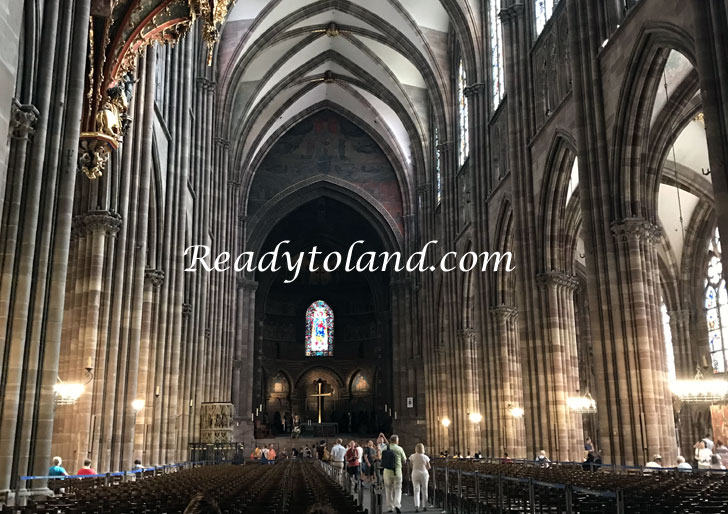 cathedral is as magnificent as it looks.

The cathedral is lined with wonderful stained glass, through which the natural light
It is even more beautifully directed by the cathedral. 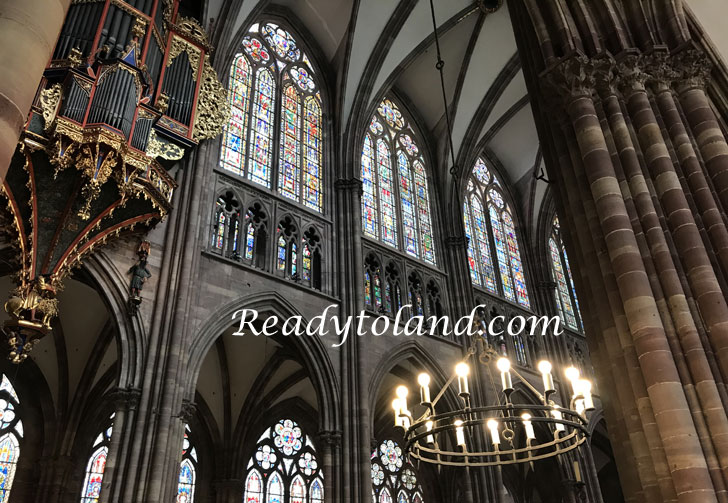 ained glass was often built between the 12th and 14th centuries, with 4600 panels adorning the walls of the cathedral. 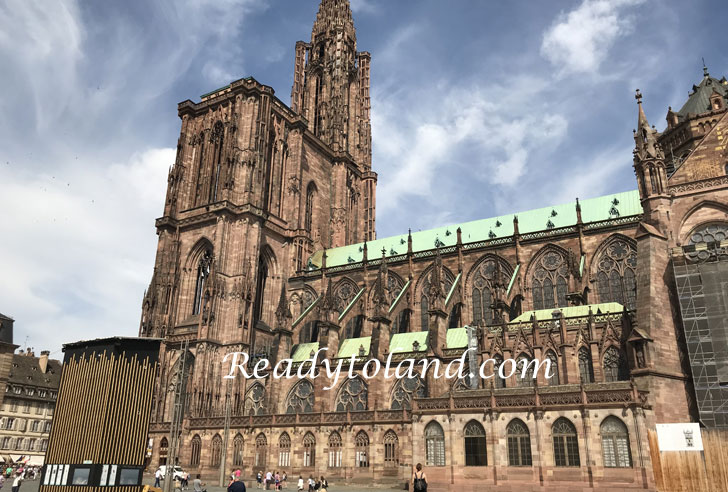 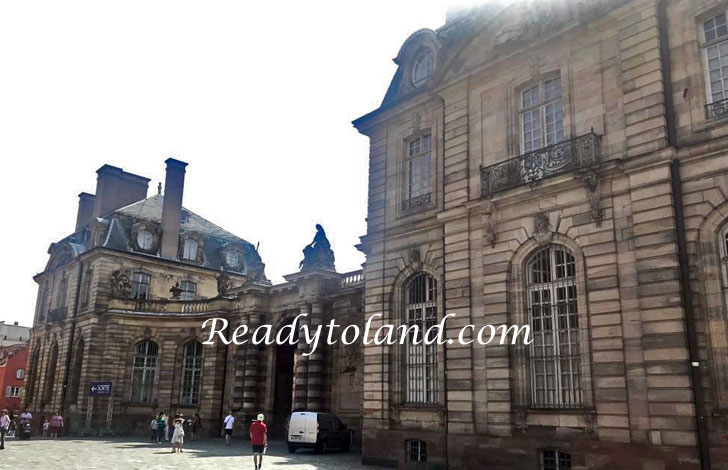 The Loan Palace, which stands near the cathedral, was built in the 18th century as the residence of the Bishop of Strasbourg,
Today, the Museum of Decorative Arts exhibits ceramics and goldsmiths, the Museum of Paintings, which exhibits paintings from the 18th and 19th centuries.
It consists of an "archaeological museum" that exhibits weapons excavated in the Alsace region. 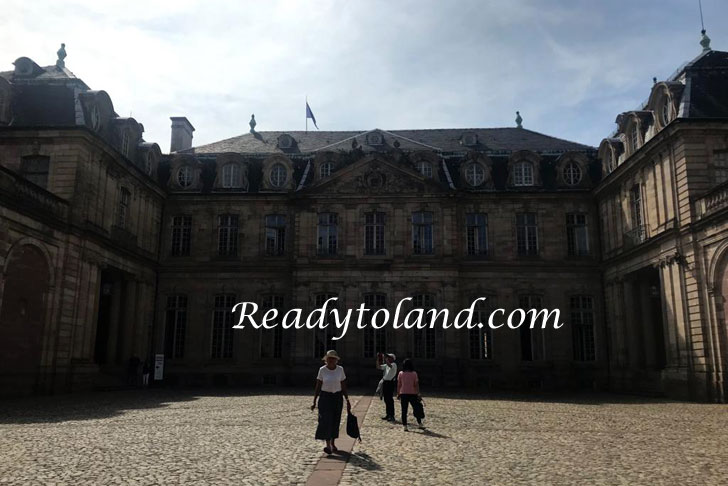 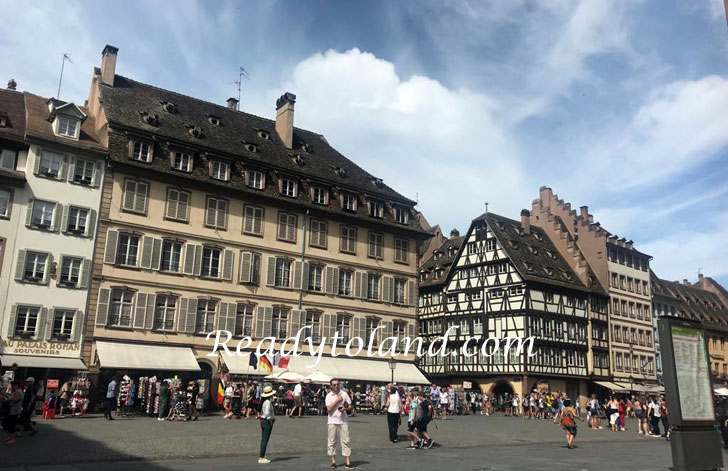 On the streets of Strasbourg, you'll see the region's distinctive white walls and black-painted wood-painted architecture.
A 15-minute walk from the Old Town, you can see this wooden building called "Petite France"
Ther 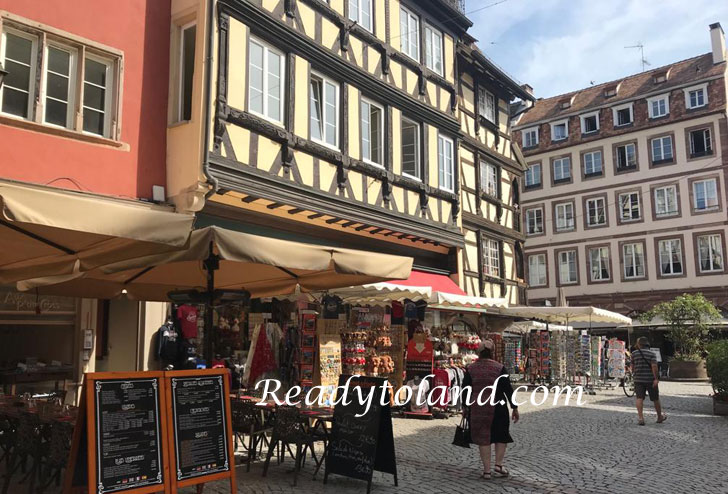 e is a district.

Next, head to the pier to see Strasbourg from the water☺ 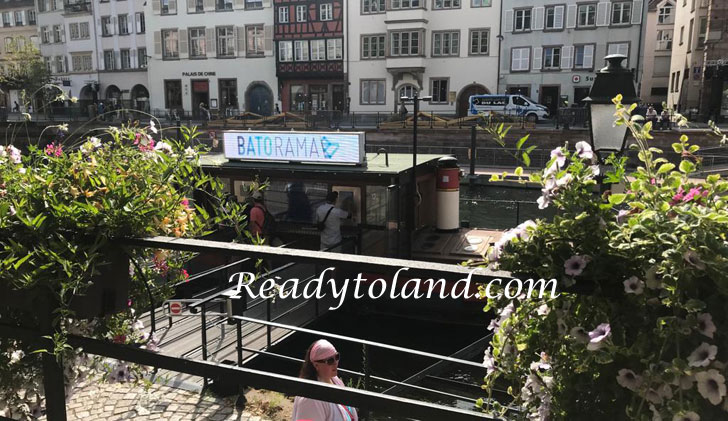 The boat is provided with an audio guide and has a Japanese explanation.

There is a vending machine for tickets at Roangu Pier, choosing the desired time zone and boat type,
You can buy it in front of time.

There are two types of boats: glass-walled air-conditioned and ceilingless boats. 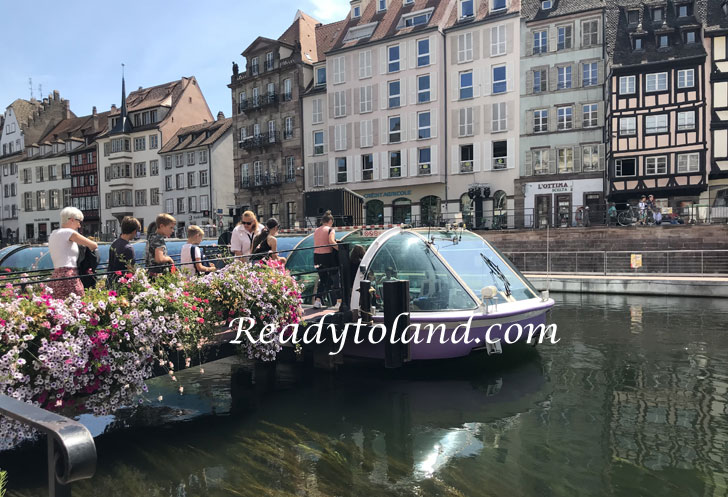 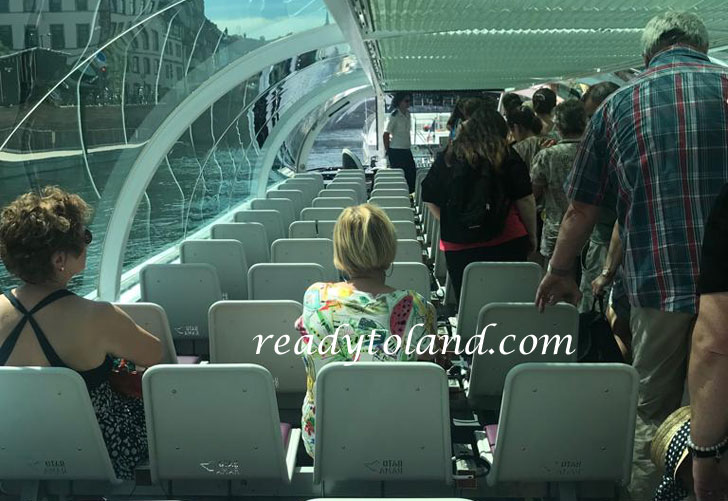 I sat by the window to take a picture, but I couldn't take the picture that I thought the light reflected off the glass,
It is recommended to board after the evening after the sun weakens. 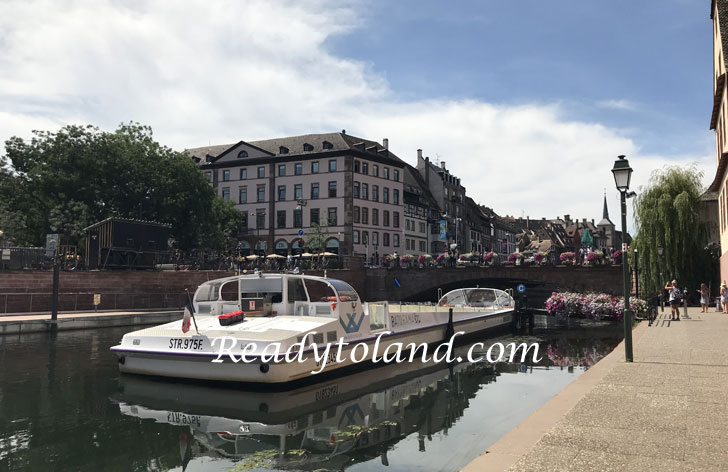 Hotels stayed in Strasbourg and how to choose

If you are thinking of traveling by train or bus in Strasbourg, we recommend hotels near the station.
There are a surprisingly reasonable number of hotels in the area, even if they are 3 to 4 stars.

The conditions for looking for a hotel for our parents and children are clean, air-conditioned, free WiFi, kettle,
Word of mouth ranking is 8.0 or more and there is a supermarket nearby.

The room was clean and the staff were very fr 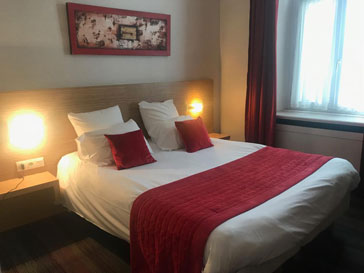 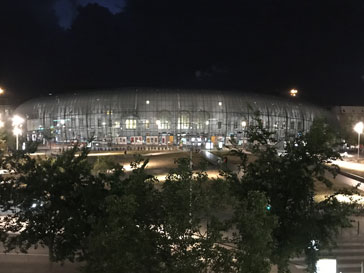 ndly and helpful. From the windows of the rooms, you can see the station and enjoy the view.

Strasbourg, a beautiful city with a mix of German and French cultures, is compact and perfect for a full-day sightseeing.

In some places of the bridge over the River Ill., beautiful flowers are decorated with well-maintained,
It is a photogenic spot that produces the cityscape more beautifully.

We went on a day trip from Strasbourg to Basel, Switzerland, or
We have access to Frankfurt.

If you're majoring in the big city of Paris, take a day trip to idyllic Strasbourg
I think there can be a change.

ホーム
What to see in Europe?