All roads lead to Rome …
Rome, with more than 2 millennia of history, is a real open-air museum.

Few places in the world boast an artistic richness like that of Rome, a city of art and beauty.

How many days do you need to visit Rome?

The city can easily be explored on foot, which is why 2 days are enough to get a taste of Rome!

However, be prepared to wait in long lines during the peak season, for museums and churches.

To avoid wasting time, we advise you to purchase your tickets in advance online,
especially for the Vatican Museums and the Colosseum.

Most of Rome’s monuments are located within 5 km of the center.
Just to get to St. Peter’s Basilica, a little far from the center, you have to take the metro.

First, take the metro line A and get off at Ottaviano and then walk to St. Peter’s Basilica. 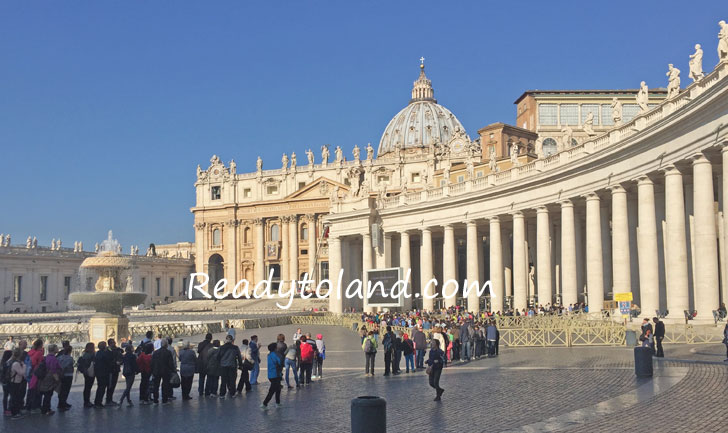 Before the current basilica, there was another dating back to the 4th century,
built by Emperor Constantine where tradition has it that St. Peter,
the first apostle of Jesus had been buried after his crucifixion.

Here you can admire the numerous funerary monuments of the popes,
the famous statue of St. Peter, and the dome designed by Michelangelo.

To access the dome, you will first take an elevator and then you have to climb 323 steps.
Note: the ceiling is low and the corridors are narrow.

* Before entering the church you must go through the baggage security checks. 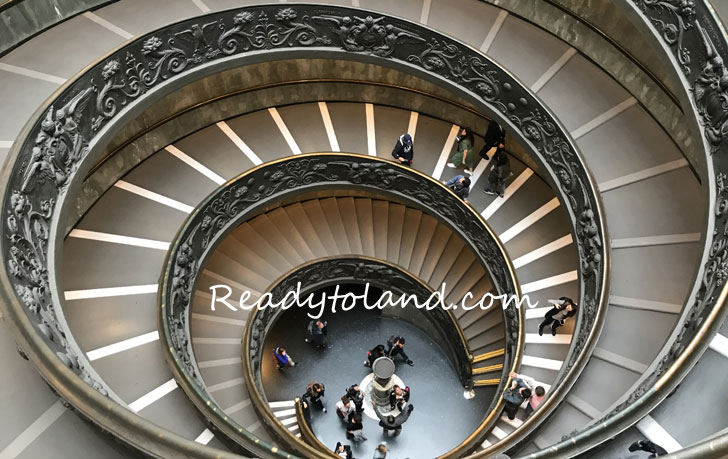 The Vatican Museums host over 50 galleries with masterpieces by artists
such as Leonardo da Vinci, Raphael, Caravaggio …

Some rooms not to be missed are the “Raphael Rooms“, “Sistine Chapel” painted by Michelangelo,
the “The Maps Hall“, and the “School of Athens“.

Buying tickets online is ideal, to not waste too much time.

* From 6 August 2021, access to the Vatican Museums will be allowed only to
those in possession of the Green Pass. 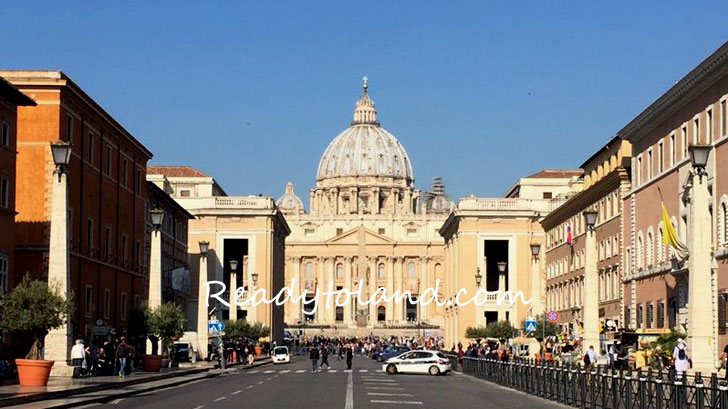 Once the visit to the Vatican is over, walk along “Via della Conciliazione”
from St. Peter’s Square, to get to Castel Sant’Angelo. 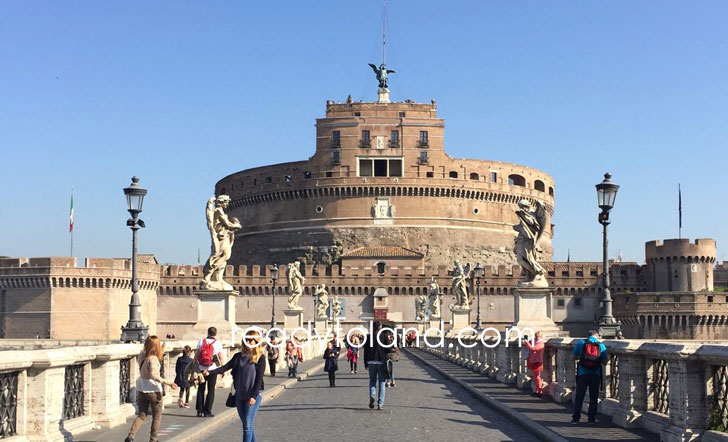 It was built as his mausoleum by the Roman emperor Hadrian in the 2nd century AD.
Then, it was a fortress in the Middle Ages, a place of refuge for the popes during the invasions.
In fact, direct access from the Vatican has been created. Finally, it was the papal apartment.

Currently, it is a museum, it is possible to visit the castle, the tombs, and the ancient apartments
of the Popes. Do not miss the terrace where you can enjoy a magnificent view of the city.

Visits to the Secret Castle are temporarily suspended 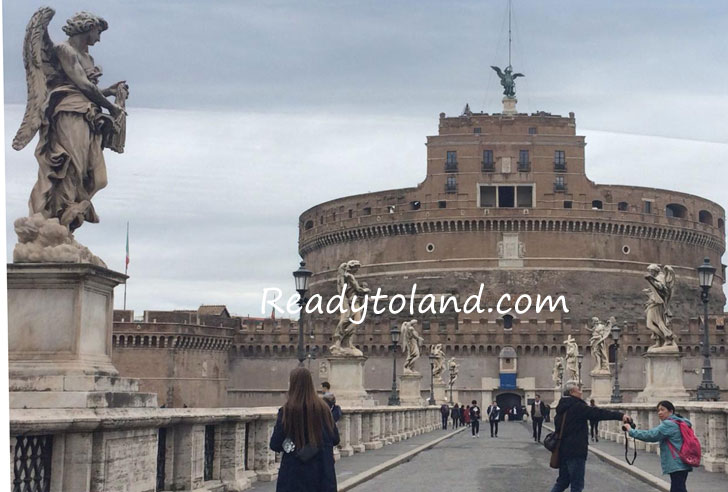 Ponte Sant’Angelo (Bridge of Angels) was built in 134 by the emperor Hadrian
to connect Ancient Rome with its mausoleum.

On the parapets, there are the ten angel statues that adorn the bridge.
They were designed by Bernini but made mainly by his students.

The two statues “angel with the crown of thorns” and “angel with the cartouche” were made
by Bernini. They were then moved to the church of Sant’Andrea delle Fratte in Rome
and a replica of them was installed on the bridge. 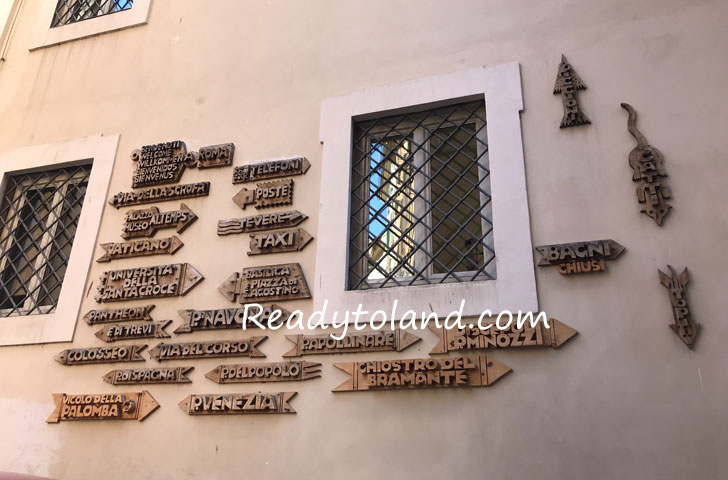 The area around Piazza Navona is lined with antique shops and various unique shops.
It is a neighborhood where you can see a different face of Rome! 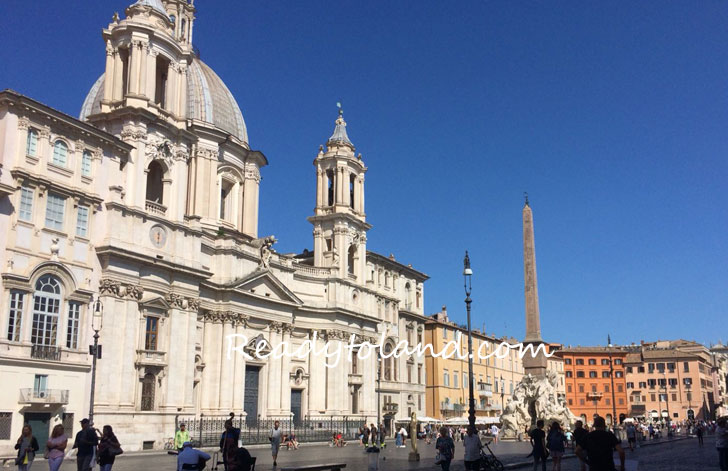 Located in the historic center, Piazza Navona is one of the most beautiful squares in Rome.
At the time of ancient Rome, it was the stadium of Domitian.

You can admire 3 fountains, a masterpiece of Baroque style: 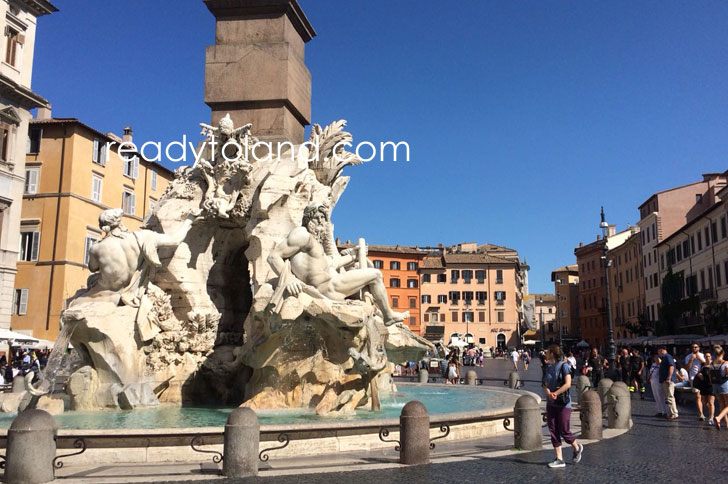 Behind the Fountain of the Four Rivers, you can instead admire the church of Sant’Agnese,
designed by Borromini.

You can stop here and have a drink or eat on one of the terraces, but watch out for the prices!

5 minutes walk from Piazza Navona is the Pantheon 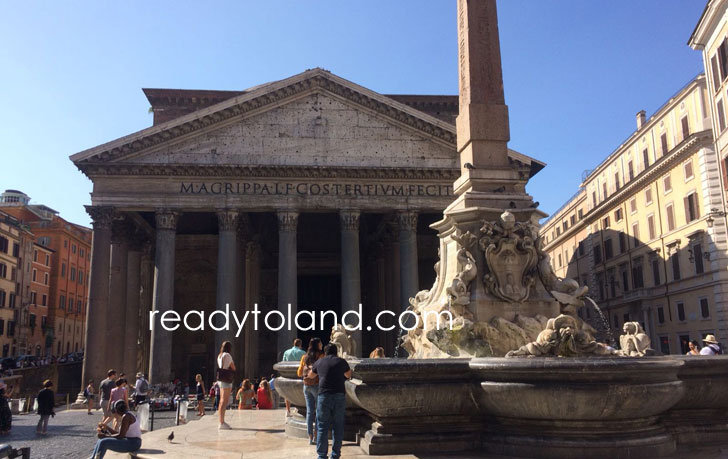 The Pantheon was built by Agrippa as a temple dedicated to all the gods in the 1st century BC.
It was rebuilt by the Roman emperor Hadrian after a fire in 80 BC.

Entry is free and it is worth going inside to admire the magnificent dome and
the tombs of the artist Raphael and the 1 king of Italy, Vittorio Emanuele II. 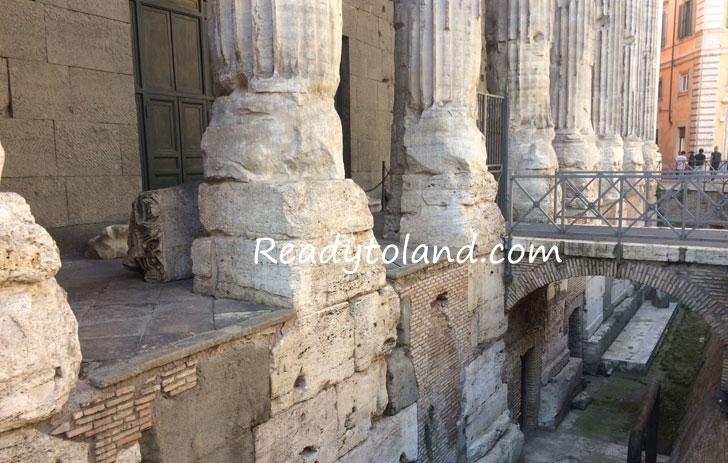 A short distance from the Piazza della Rotonda, there is Piazza di Pietra.

The square owes its name to the presence of the remains of the ancient temple
dedicated to the emperor Hadrian, built in 145 AD.

From Piazza di Pietro go straight on, crossing Via del Corso, a famous shopping street,
to then arrive at the Trevi Fountain. 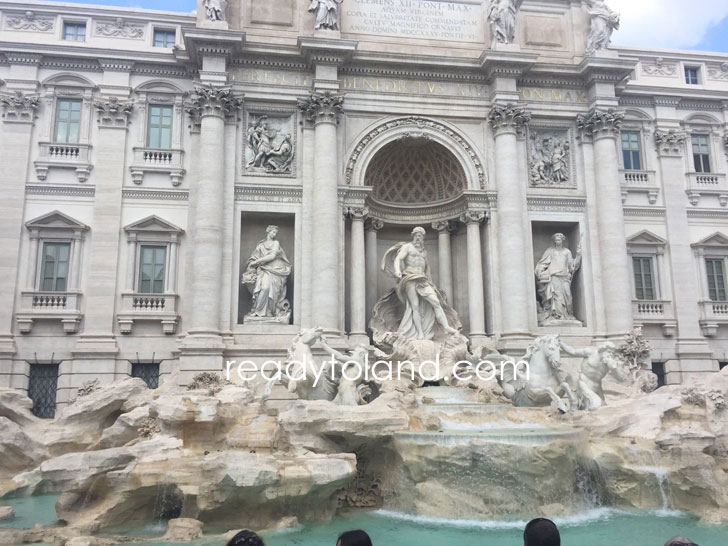 One of the most important attractions of Rome is the Trevi Fountain, also present in the
scenes from films such as “Roman Holiday” and “Dolce Vita”.

The fountain was built by Nicola Salvi in ​​1732 and completed by Giuseppe Panini.
Behind it, there is a large Baroque-style building, the Palazzo Poli.

The fountain is decorated with sculptures of Roman gods, tritons, and sea horses.
Neptune with his chariot is in the center.

Tradition has it that you have to throw 2 coins:
one to make sure you return to Rome and the other to make a wish.

From the Trevi Fountain, continue straight on Via del Lavatore, up to Via del Traforo.

Then turn left, and continue straight, crossing Via del Tritone, onto Via dei Due Macelli
until you reach Piazza di Spagna. 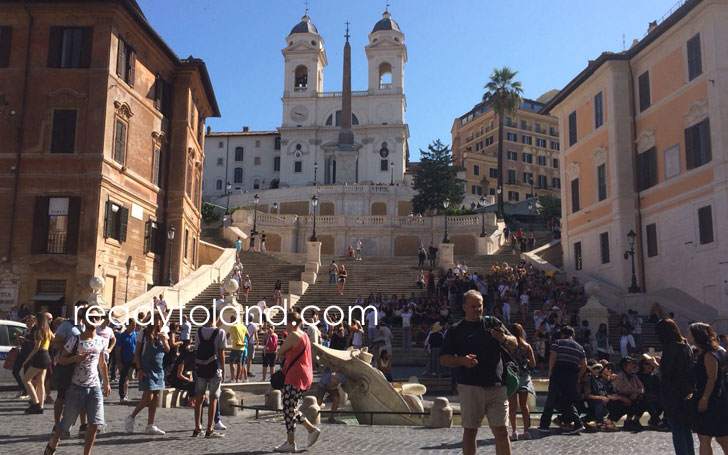 Piazza di Spagna is one of the most famous squares in Rome!

One of the main streets in the area is Via Condotti with luxury shops such as
Louis Vuitton, Prada, Gucci, Bulgari, and Ferragamo. 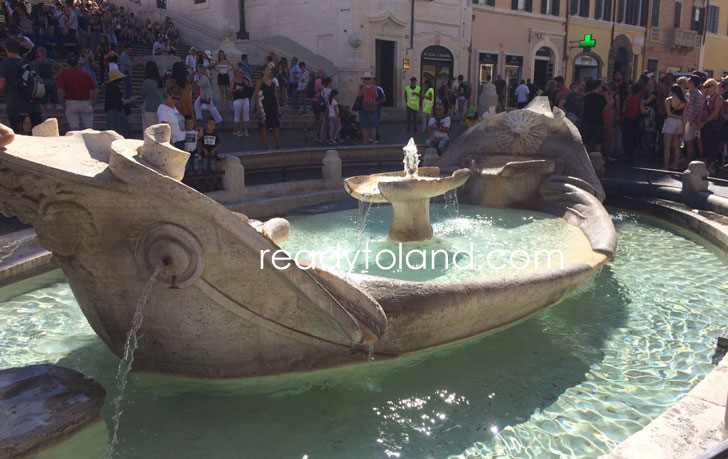 In the center of the square, there is the Barcaccia fountain designed by Pietro Bernini
and concluded by his son, Gian Lorenzo Bernini.

The fountain has the shape of a boat and is immersed in an oval pool.

On the top of the staircase is the church of the Trinità dei Monti, founded in 1495.

If you go up the steps, turn left, and continue straight you will arrive at the Pincio. 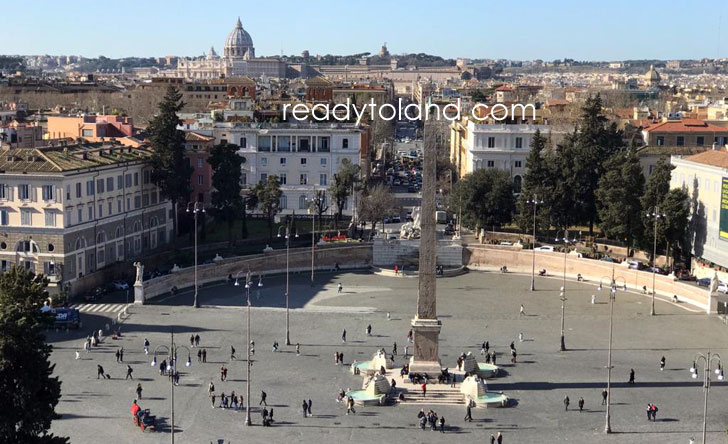 From the terrace of the Pincio, you can enjoy a wide view of Piazza del Popolo.
On the horizon, you can admire the dome of San Pietro, the Quirinale, Gianicolo …